So last season the press were on Arsenal Manager, Arsene Wenger’s back to find a new goalkeeper, but he kept his faith in a young talent called Wojciech Szczesny. And boy was he right to keep the faith as a large proportion of you all agreed that this season he was your choice as goalkeeper of the season. Well done Wojciech!

The following is a break down of your top 5 players:

So David De Gea was a double winner but Manchester City’s Joe Hart goes not 1 but 2 Awards better! Oh yes he is a talented Goalkeeper and he’s English! With all that foreign talent in our Premiership, Joe Hart cleans up…

Our England Number 1, now selected for the Euro 2012 is set to show Europe how good he is… So massive congratulations to Manchester City’s Joe Hart for:

Not 1 but 2 Awards this time for just one Goalkeeper… And if we look back to last year this Goalkeeper was being written off by sections of the press. It just goes to show that you shouldn’t believe all you read in the tabloids. So a big congratulations to Manchester United’s David De Gea for:

The Busiest Goalkeeper not just on the number of shots on goal, but with the number of shots to games ratio was Wolverhampton Wanderers Goalkeeper, Wayne Hennessey. As you will see below he won by a clear mile to the next busiest keeper. With so many shots on goal it looks like he didn’t get a moment’s peace. However with the injury he has now sustained he now at least gets four months worth of rest… I wish him well and hope to see him back in action soon! 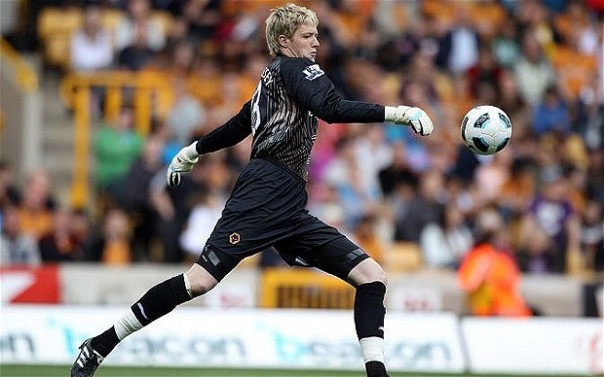 Pressing times – Does a goalkeeper press forward or not?

I had a tweet this week from @Pumpherston_Utd who asked me if I had any tips on GK decision making for youngsters and to explain what the trigger is for when to stay, when to press out. So as promised, this week I shall hopefully provide some answers…

Of course in Goalkeeping there are a number of triggers for a Goalkeeper to know all dependent on the situation they face, such as the trigger to rush out in a 1v1 situation; the trigger of when to stay put or not for a cross or high ball; and the one we are going to look at here, that being the triggers related to positioning during phases of play and whether to press forward or not.

There are many schools of thought, but ultimately they are all dependent on where the action is on the pitch, however for our young student keepers we need to start with the easiest example.

First of all we need to imagine the pitch being split into 3rds: 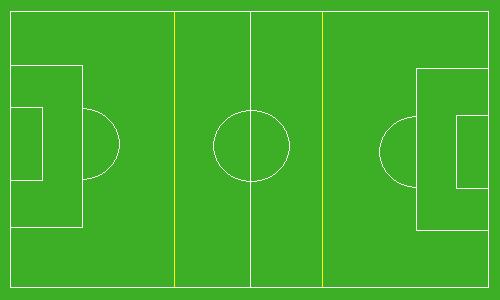 So now we look at where a goalkeeper should position themselves in relation to where the action is on the pitch. However, in all these instances the Goalkeeper shall need to follow the movement on the pitch moving left and right in line with the ball and the goal…

First lets look at action in the 3rd closest to the goal: 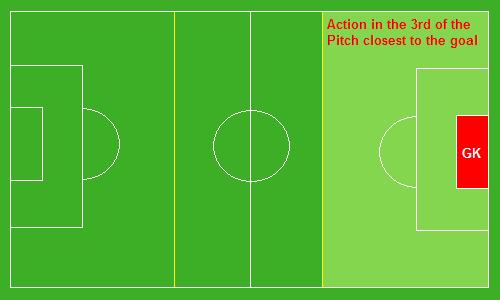 As in the diagram, for instances where the action is in this 3rd nearest the goal, the goalkeeper would position themselves in the 6 yard box (marked in Red). However remember that the Goalkeeper should look to stand off their goal line, not too far off the line that could allow the opposition to chip over their head and not to far back that they look too small in goal or that they can’t step back if need be.

If action then moves into the middle 3rd:

As in this diagram, for instances where the action is in the middle 3rd, the goalkeeper would position themselves in the 18 yard box (marked in Red). Remembering that if the action changes and comes back into the closest third to start moving back into the 6 yard box as described in the first example.

Finally if action moves into the final 3rd:

This time the goalkeeper can come forward and sit around the D next to the 18 yard box (marked as a Red blob) for instances where the action is in the final 3rd. The Goalkeeper is almost acting like a sweeper. That sometimes where the ball is played over the top the Goalkeeper may be closer than the defenders to come out and kick the ball back up the pitch. But they must only do this if they are able to do so, confident enough to distribute the ball, and agile enough to get back to protect their Goalkeeping line.

Movement from the goal and back to the goal line, when to stay and when to press is then all dependent on those triggers of seeing where the action is on the pitch. Not just moving based on the 3rds but also across the pitch in line with the ball.

This is just the basics, for those young student Goalkeepers and should help them to begin  to appreciate where they need to think about positioning themselves. Then as they get older, more agile and more confident, they may perhaps have a better understanding of the game, reading it better, Perhaps like my daughter, who now moves further forward (if safe to do so) – quickly moving back and forth with the action… it also keeps her warmer in the winter! 😉

I hope this helps. Happy Goalkeeping! 😉

So Roy Hodgson this week made his first big decision as the new England Manager, to name the squad for the Euro 2012 finals. With some familiar faces, some that were missing and some new ones. As usual of an England Manager there were those quick to rain on Roy’s parade, that he hadn’t pick this player over that… However you can’t really argue over his selection of the Goalkeeping position.

Again, we see that this country does have much exciting talent for this position, even with Ben Foster withdrawing from International Football.

He was always going to select Joe Hart and as my stats shall show later this week he deserves this more than most. Fast proving himself one of the best keepers in the world. Hopefully he will get to prove this at the Euros!

Then we have Robert Green. He has his doubters after some high profile errors, but he does learn from them. His form in the Championship with West Ham has been brilliant with: 15 Clean Sheets – That’s a 35.71% Clean Sheets to Games Ratio; 45 goals conceded in 42 games played for West Ham; and Keeping it mean at the back with a 17.79% of goals conceded to shots on goal ratio.

Today Robert Green now heads back into the Premiership with West Ham following an excellent game of football (for the neutral) in the Championship Play Off Final. It does make you question why the papers are linking Paul Robinson with a move from Blackburn to the Hammers, after all why would they want to replace such a talent.

And you have to applaud Roy for selecting John Ruddy, who had pulled off some remarkable saves at Norwich (his stats are also coming soon…). He most certainly deserves his place. 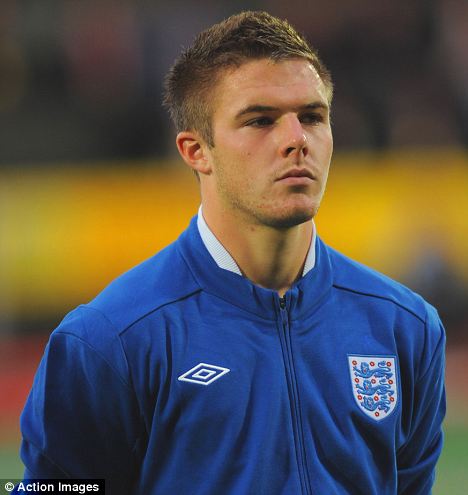 Finally if for what ever reason one of these 3 are withdrawn, we have a great young keeper on the replacement list, Jack Butland. As previously posted when enthusing about the young talent in the wings he has been producing immense displays on loan for Cheltenham Town that has got him not only watches by a number of Premier League clubs but also noticed by the England Senior squad. Way to go Jack!

In fact way to go all the England Keepers. Bring on the Euros and some great Goalkeeping displays! 😉

My daughter’s team will have conceded 40+ goals this season in 16 games. However in no way does that mean that the team have been poor. What cannot be seen by a team’s goals conceded is the type of goals scored: Goals that even top-class professional Keepers struggle to keep out of the net; or Goals that come from an unlucky bounce, unforced errors and flukes. It also doesn’t take into account that the team did actually play really well all season, giving their maximum effort, but that the opposition may have actually played better. 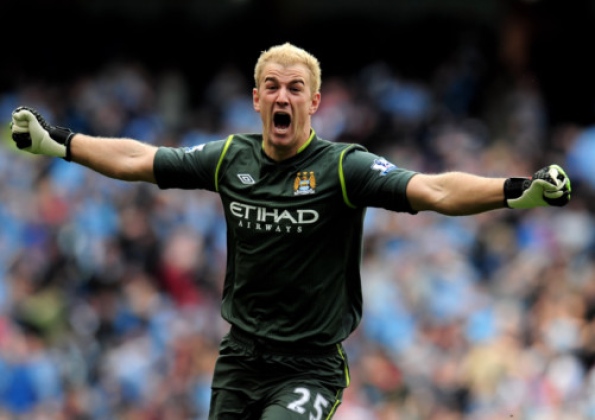 Joe Hart shall pick up the Golden Glove award in the premiership for his 17 clean sheets, 2 more than the next best Goalkeeper. A talented goalkeeper for sure. He should also be in part thankful to his talented defence for this award, as he wasn’t necessarily the busiest keeper in the Premiership…(We shall review those stats very soon and like I did for the Championship Keepers, sing the praises of the other Premiership Keepers who also deserve recognition alongside England’s Number 1!)

Basically the point I am getting at for our young Goalkeepers and also to their respective teams is that Clean Sheets are difficult to obtain. So try not to put yourself under pressure, if you rarely keep a clean sheet. If you do it then that is a bonus. If however you are keeping clean sheets regularly, be thankful also of your team as they may too play a big part in your success.

But above all don’t worry about conceding goals – the main thing is to look at improving yourself (as a player and as a person) and more important than that, to have fun! 😉

The final award in this series is for the busiest Goalkeeper in the Championship 2011-2012. Which is based on the amount of shots on goal versus the number of games played, giving an average amount of shots on goal per game. So spare a thought for our winner of this is Peterborough’s Paul Jones… He may not have had many clean sheets this season, but with this aount of shots per game, he was always going to find it difficult to win the golden glove award!

3 Awards this time for just one Goalkeeper. Showing that age is not a barrier for Goalkeepers to still perform at teh highest level. Maik Taylor wins the awards for:

Best Clean Sheets to Games Ratio in the Championship 2011-2012 season is Hull City’s Goalkeeper (on loan from Arsenal) Vito Mannone.