Adios to Barcelona for Valdes…

I have grown up supporting a team I watched as a young boy and that support has never wavered through both the good and bad times of football, I have been there through thick and thin. However even though I am an avid supporter of my club I do look out for the results of certain other teams, whether that be because I have friends or relatives who support them, or in the case of Barcelona, because of the number of great holidays to this beautiful part of the world, almost making Barcelona feel like a second home. That coupled with my good understanding of the Spanish language allowing me to read a good chunk of the words in the Spanish press, especially my favourite paper the Sport (This is not in any way the same as the UK boob filled newspaper, this is actually about sport!) allows me to follow Barcelona in more ways than one. Not just from reading the papers whilst on holiday, but also through their App and Facebook site, meaning I am flooded with information on the team, giving me yet more reasons to practice my Spanish  whilst reading about the latest rumours in the Barcelona camp.

When it comes to rumours, often the Sport out-trumps our press. They called it right on the transfers of Thierry Henry, David Villa and most recently Alex Song from Arsenal. So as a fan of Goalkeeping a number of stories recently have really caught my eye… That Victor Valdes is not looking to renew his contract with Barcelona when it expires in 1.5 years.

The UK press are all over this story too, already throwing names in the frame as their own potential ‘Exclusives’. With one rumour being that Liverpool and Barcelona could be looking to do a swap for Spain’s 2nd choice goalkeeper, Valdes, for Spain’s 3rd choice keeper, Pepe Reina. Which would make sense as Reina was a former Barcelona scholar and would probably like a return. However, when you read the Spanish press there is a different name being touted, one which make’s more sense, Thibaut Courtois. 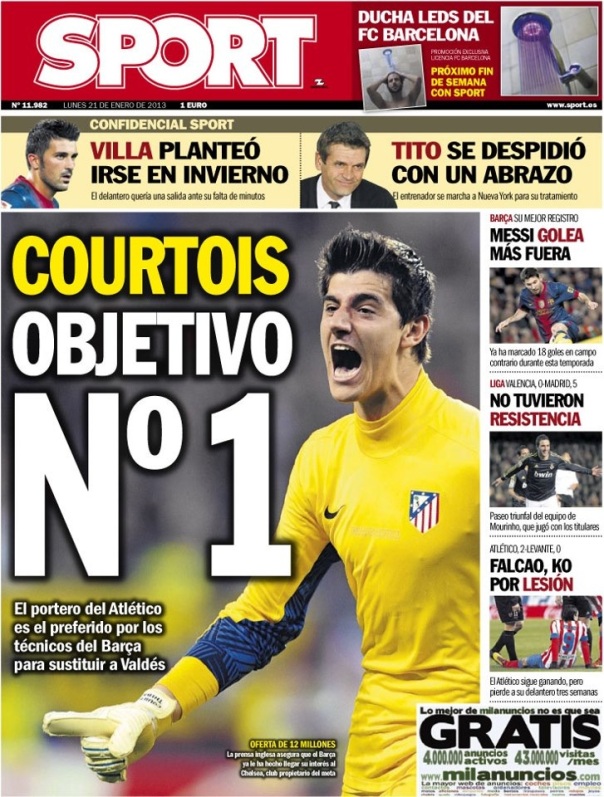 Courtois, is someone Barcelona have been able to see up close, from his time on loan from Chelsea in La Liga at Atletico Madrid. Seeing Courtois in very impressive form… Last season (2011-2012) saw him keep 23 clean sheets 52 appearances for Atletico Madrid and this season (2012-2013) to date he has kept 14 clean sheets in 24 games! No wonder  he appears to have caught their eye, and no wonder why Chelsea want to hold contract talks with him… However, even though this impressive form ought to see him get more first team appearances with his current employer on his return from loan, there is the issue of the also impressive Petr Cech being in his way. With Cech as the first choice keeper, would Courtois really be happy as  the second choice, when this Summer he could be guaranteed first team action? All of which means there is a lot more to this rumour than just paper talk…

It will be a shame for Barcelona to lose Valdes, who according to the Sport will be sold in the Summer. He has been such a great Goalkeeper for them over the many years as their number 1. Indeed, he has had his low points, his critics and dropped the odd clanger, but which keeper hasn’t (including those at the highest level). His stats over the years show that he deserves the praise and recognition he is getting. Most notably his best form was in 2007, when he entered the Barcelona record books after not conceding a goal for 466 minutes, followed by winning the best goalkeeper in Spain in the 2008-2009 season beating the Spanish 1st Choice Goalkeeper Iker Casillas – some feat. It is part of the reason why Barcelona will remain fond of him. I wish him well and perhaps maybe… he will decide to come to the Premiership. If so then I for one can’t wait to see him in action! 😉

As the Worcester Goalkeeper Academy starts back on Friday, I thought it about time to highlight some more of their many Goalkeeper coaches… We start with one of their newer coaches, who is developing into a fine coach (as the Academy is not just about developing players, but coaches too).

Has played as a goalkeeper for 14 years and so have experienced both the good and bad side to coaching.

Played in goal for a team in the top division of Under 18’s Football in Bristol.

Level 2 Sports Leader gives the qualities needed to coach a wide range of activities to all ages.

Started coaching whilst at Secondary school as he wanted to help the next generation of athletes progress to the next level.

Currently undertaking my FA Level 2 football coaching course to advance his knowledge of the game.

Currently in the first year of a Physical Education and Sports Coaching Science degree at the Worcester University.

To coach Goalkeepers in an enjoyable learning environment, where the Goalkeepers can advance their knowledge and skills within the art of Goalkeeping.

“My aim is to progress the Goalkeepers ability at the academy as well as to advance my skills as a coach so I can become a better coach in the future.”

Luke also writes his own blog detailing his coaching experiences at the Academy. Go check it out at http://allgoalkeepersarecrazy.blogspot.co.uk/

Well what a start to a season and end to a year that was, with no wins for my daughter’s team. With results at the start in double figures to nil, to seeing things change towards the end of the year. There seemed to be a wind of change…

This change in fortune was down to 3 things: The players understanding their positions and their impact on the game; leading to them improving and believing in themselves; and from the opposition finally agreeing to field the same number of players as our team, rather than steam rollering us with their usual 2 extra players (as we are still short on players). This last point is crucial, as before with these extra players and often with subs meant that our players would get both over-run and exhausted. Often they would put in an immense performance first half and then (as we would observe) in the second half run out of steam, which meant that the pitch would then open up to the opposition and my daughter would be very busy in goal. It did give her lots of practice and drew a mixture of praise and sympathy from the parents on the sidelines.

All the players wanted was 1 win this season and in addition my daughter wanted a new set of Goalkeeper gloves. Well they must have been exceedingly good girls, as that all round great guy, Santa must have listened to them… as not only did my daughter get her new gloves, but the players finally got the win they have deserved (against a team with just 1 extra player), in their first game of 2013! 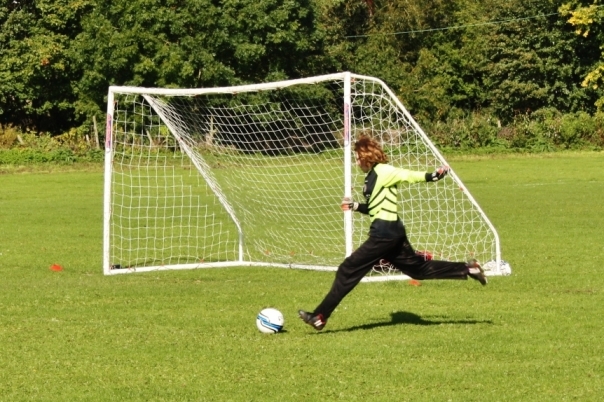 My daughter’s new gloves worked a treat and she seemed to be catching the ball as if she had glue on them. Previously she would prefer to parry and punch, but this time she went to catch all that was shot at her! Her performance was superb, as was the team’s, winning 1-0!  They were so elated after the match, you would think they had won the league. What a great boost to their confidence. We had been telling them for ages that they were good players, that their performance in each of their last matches was better than the scoreline suggested. I do hope they now belive us!

On the goalkeeping front (yes I hadn’t forgotten, that this is a Goalkeeping blog 😉 ), only a couple of minor goalkeeping errors in this match, relating to being distracted and not being alert to the situation, but only 2, after all Goalkeepers make the odd error… and besides with her performance, handling, diving, positioning, movement, goal kicks, etc, these are 2 minor issues we can easily overlook.

What a great start to 2013, long may it continue. I am hopeful of more great results, so let’s hope we can now build on this and keep improving. Even if we don’t win again, at least we have won 1. Then again at grassroots level we are about development, so if they put in a worthy performance and improve (outfield and goalkeeper), but don’t win, in my eye’s that is a far better result. 😉

The WordPress.com stats helper monkeys prepared a 2012 annual report for this blog.